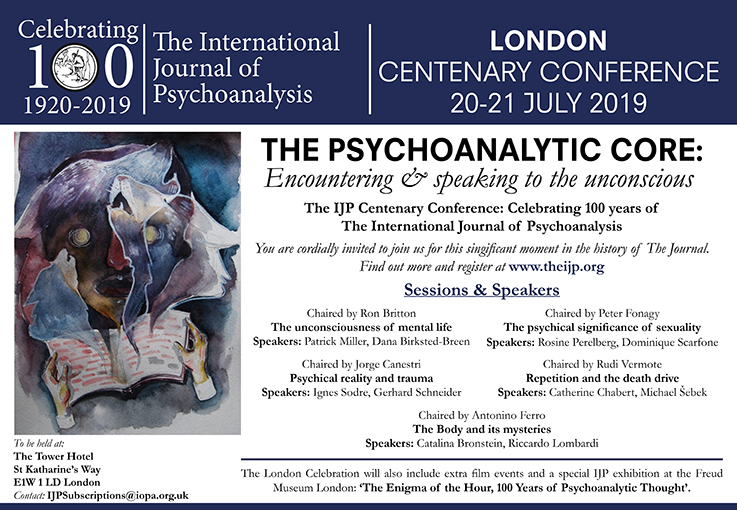 The English Speaking Weekend Conference is open to members and candidates of the International Psychoanalytic Association (IPA) and its component societies, and also to members of the British Psychoanalytic Council (BPC) and of the Association of Child Psychotherapists (APC).
Psychoanalysts and psychoanalytic psychotherapists from outside the UK who are not IPA members may register if supported by an IPA member. ​A brief supporting letter from the IPA member should be sent to outreach@iopa.org.uk before registering for the conference.

This conference will explore the vicissitudes of affects and the capacity to develop mental representations in relation to the body, in both adult and child analysis. Affects are rooted in the body and profoundly affect the functioning of the body and the mind. The quality and/or lack of the capacity to hold representations is paramount to the functioning of both mind and body. The speakers will explore these issues, focussing on three broad areas: psychosomatics; pain, self-harm and violence; and autism and autistic defences. Two clinical papers will be presented in each of these areas, followed by an open dialogue between the speakers and with the audience.

Saturday 29 September
Main conference and evening party with drinks, light food and jazz at the Royal College of Physicians (see below for map) 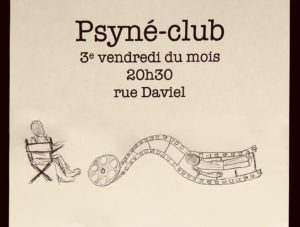 Following the highly successful event held in March 2016 as a fundraiser for the Psychosis Therapy Project, this conference offers to have another look at the complex interface between psychosis and psychoanalysis.

An international panel of eminent clinicians and theoreticians in the area of psychosis will share their experience and expertise as they discuss the promises and the pitfalls of the psychoanalytic engagement with psychosis.

David Morgan
The Political Mind: Psychotic Anxieties and the Desire for Authoritarianism in Neo-Liberalism and the Individual Psyche

Berjanet Jazani
Psychotic Politics: a Fury Road to the Awakening of the Primal Father

Brett Kahr
“Slashing the Teddy Bear’s Tummy with a Carving Knife”: The Infanticidal Roots of Schizophrenia.

History: Psychoanalysis in the Community

Anne Zachary
Water, no fire … Looking to Winnicott to Understand Care in the Institution

Dorothée Bonnigal-Katz is a psychoanalyst and a translator. She is a member of the Site for Contemporary Psychoanalysis, UKCP, CPJA and CP–UK. She is the founder and clinical lead of the Psychosis Therapy Project. Her work as a translator includes a number of psychoanalytic texts such as Dominique Scarfone’s Laplanche: An Introduction (2015) and The Unpast: The Actual Unconscious (2016). Her latest translation, Laurence Kahn’s Psychoanalysis, Apathy and the Postmodern Patient is due to come out later this year in the New Library of Psychoanalysis series (Routledge).

Françoise Davoine is a psychoanalyst in private practice; she was a member of the Ecole Freudienne de Paris (the psychoanalytic organisation founded by Jacques Lacan) until its dissolution in 1980. She is Professor Emeritus at the Ecole des Hautes Etudes en Sciences Sociales in Paris where she led, with Jean Max Gaudillière, a weekly seminar on “Madness and the Social Link,” until Jean Max Gaudillière’s death in 2015. She is Erikson scholar at the Austen Riggs Center, Massachusetts, USA and delivers seminars and lectures in Europe, the US, and Latin America.

Patricia Gherovici is a psychoanalyst and analytic supervisor. She is co-founder and director of the Philadelphia Lacan Group and associate faculty in Psychoanalytic Studies at the University of Pennsylvania (PSYS). She is an honorary member of IPTAR, the Institute for Psychoanalytic Training and Research in New York City (IPTAR is part of the IPA) and a member of Apres-Coup Psychoanalytic Association, New York. Her books include The Puerto Rican Syndrome (Other Press: 2003; Gradiva Award and Boyer Prize), Please Select Your Gender: From the Invention of Hysteria to the Democratizing of Transgenderism (Routledge: 2010), Lacan On Madness: Madness, Yes You Can’t (with Manya Steinkoler, Routledge: 2015), Lacan, Psychoanalysis, and Comedy (with Manya Steinkoler Cambridge University Press: 2016) and Transgender Psychoanalysis: A Lacanian Perspective on Sexual Difference (Routledge: 2017).

Berjanet Jazani is a medical doctor and a practising psychoanalyst in London. She is an analyst member of the Centre for Freudian Analysis & Research, where she teaches and supervises clinicians and candidates in training. She is a regular contributor to the online publication of the Iranian Medical Council in the field of mental health. Forthcoming publications include: “Lacan, forbidden!” in Persian (2018); “A Phoenix Journey: Faces of desire” a collection of introductory essays on Lacanian concepts in English (2019); “A Resident of the World” and “Le Silence de la mer(e)” JCFAR2018/2019.

Brett Kahr has worked in the mental health profession for over forty years.  He is Senior Fellow at the Tavistock Institute of Medical Psychology in London and, also, Senior Clinical Research Fellow in Psychotherapy and Mental Health at the Centre for Child Mental Health, as well as Trustee of the Freud Museum London and of Freud Museum Publications.  He is author or editor of eleven books, including the best-selling Sex and the Psyche (Penguin Books) about the traumatic origins of sexual fantasies; and he has served as series editor to over fifty further volumes.  His most recent book is entitled Bombs in the Consulting Room: Surviving Psychological Shrapnel (Routledge, 2018), and his forthcoming book on The Traumatic Roots of Schizophrenia (Routledge, 2019) is due to appear shortly.

Vassilis Kapsambelis is a psychiatrist and a psychoanalyst, a full member of the Paris Psychoanalytic Society (SPP). He has been General Director of the “Mental Health Association in the 13th district of Paris” (ASM 13), the organization that introduced community psychiatry and psychotherapy in France. He currently directs the Centre for Psychoanalysis (Kestemberg Centre) of this association.

David Howell Morgan is a consultant psychotherapist and psychoanalyst, a Fellow of the British Psychoanalytic Society. He is a training analyst and supervisor at the BPA and a member of the IPA committee on Humanitarian Organisations. He has worked with psychosis at the Maudsley Hospital supervised by Murray Jackson and at the Portman Clinic with forensic patients. It is said that “Psychotic patients attack their own minds; Forensic patients attack the minds and bodies of others.” He is chair of the Political Minds seminars at the Institute of Psychoanalysis and co-chair of the EPF Political Minds. He is involved in Frontier Psychoanalyst Radio and Resonance FM. He lectures internationally and nationally. His most recent publications include “Inflammatory Projective Identification in Political and Economic Terrorism” in Psychoanalytic Psychotherapy (Spring 2018) and “The Return of the Oppressed” (Warsaw EPF Conference).

Anne Zachary is a Fellow of the British Psychoanalytic Society. She works in private practice as a psychoanalyst. She trained in medicine and psychiatry at the Royal Free hospital, specialized in psychotherapy at the Cassel hospital, trained concurrently as a psychoanalyst and worked at the Maudsley hospital, before becoming a consultant at the Portman Clinic. The Portman assesses and treats patients in the community with problems of sexual perversion, violence and delinquency. She also consulted to medium secure units and Broadmoor hospital. Her latest book The Anatomy of the Clitoris: Reflections of the Theory of Female Sexuality was recently published with Routledge (2018). 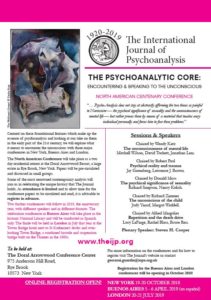 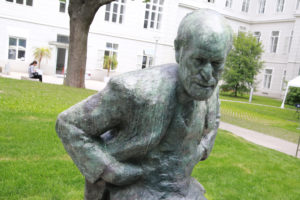 In honour of Sigmund Freud: statue unveiled at MedUni Vienna

Photos of the event: https://www.apa-fotoservice.at/galerie/13651

(Vienna, 4 June 2018) At 3:25 pm on 4 June 1938, the Orient Express pulled out of Vienna’s Westbahnhof headed for Paris. Sitting on board as one of the most important people of the time: the 82-year-old Sigmund Freud. He was leaving the city he loved but under which he had also suffered. He was never to see it again. Exactly 80 years later, on Monday, 4 June 2018, a larger-than-life-size Freud statue by Oscar Nemon in London was erected and unveiled on the grounds of the Rectorate of the Medical University of Vienna, as a symbolic act in recognition of Freud’s achievements. The ceremony was also attended by Lord David Freud, Sigmund Freud’s great-grandson.

“This act is in recognition of Sigmund Freud’s huge achievements and to acknowledge our responsibility as the Medical University of Vienna for the expulsion of this outstanding scientist,” said MedUni Vienna Rector, Markus Müller. “The “annexation” of Austria by the Nazi German Reich marked a profound break in the history of our university. For a long time, nobody spoke of what followed. However, the devastating consequences of 1938, in particular the expulsion of more than half the medical staff on grounds of racism or anti-Semitism, are a warning from history to future generations.”

Most influential researcher in the world

Stephan Doering, Head of the Department of Psychoanalysis and Psychotherapy at MedUni Vienna, underscored Sigmund Freud’s huge achievements: “Mozart and Freud are the most famous Austrians in the world and Berggasse 19, Freud’s address in Vienna, the most famous address in the world. Moreover, Freud is Austria’s most frequently cited researcher, with a Hirsch-index of 282. This makes him the most influential scientist ever.” At the same time, Doering stressed that Freud’s visions had been realised at MedUni Vienna: there has been a Psychoanalysis Department since 1971 plus also an outpatient clinic where socially deprived patients can obtain psychoanalysis on health insurance. Furthermore, psychoanalytical research is conducted in the spirit of Freud, who always wanted to see his specialism move closer towards medicine and biology. And, as from 2019, MedUni Vienna will be offering a postgraduate course in psychoanalysis and psychodynamic psychotherapy. 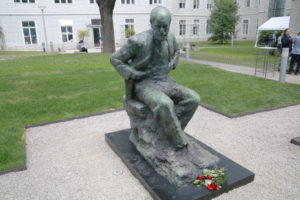 “I am delighted that after all these years there is a statue of my great grandfather back in the City for which it was originally intended. Oscar Nemon created a stunningly evocative sculpture which is a worthy commemoration of Sigmund’s life and work. More than anywhere else in the world, it belongs at the Medical University of Vienna, successor to the organisation at which Sigmund was proud to call himself a Professor for half his adult life.  I would like to pay tribute to the generosity of the Nemon family in making the mould available to allow this new casting to be made,” said Lord David Freud.

Lady Aurelia Young, daughter of artist Oscar Nemon, went on to add: “It was my father’s greatest wish that his statue of Sigmund Freud, which he made in Vienna in 1936, should be placed in Vienna – its original intended home. I would like to thank the many people who have made this dream come true, particularly the Medical University of Vienna, for giving the statue a home.”

A fundraising project enabled the bronze statue to be brought to Vienna. Every individual or company who donates more than €500 will have their name entered on the plaque attached to the statue – donations are still required.
For more information: www.meduniwien.ac.at/web/forderer-stifter/sigmund-freud-statue.