Accueil » Évènements » Is there a place for psychosis in psychoanalysis?

Is there a place for psychosis in psychoanalysis? 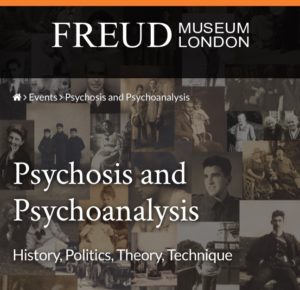 Following the highly successful event held in March 2016 as a fundraiser for the Psychosis Therapy Project, this conference offers to have another look at the complex interface between psychosis and psychoanalysis.

An international panel of eminent clinicians and theoreticians in the area of psychosis will share their experience and expertise as they discuss the promises and the pitfalls of the psychoanalytic engagement with psychosis.

David Morgan
The Political Mind: Psychotic Anxieties and the Desire for Authoritarianism in Neo-Liberalism and the Individual Psyche

Berjanet Jazani
Psychotic Politics: a Fury Road to the Awakening of the Primal Father

Brett Kahr
“Slashing the Teddy Bear’s Tummy with a Carving Knife”: The Infanticidal Roots of Schizophrenia.

History: Psychoanalysis in the Community

Anne Zachary
Water, no fire … Looking to Winnicott to Understand Care in the Institution

Dorothée Bonnigal-Katz is a psychoanalyst and a translator. She is a member of the Site for Contemporary Psychoanalysis, UKCP, CPJA and CP–UK. She is the founder and clinical lead of the Psychosis Therapy Project. Her work as a translator includes a number of psychoanalytic texts such as Dominique Scarfone’s Laplanche: An Introduction (2015) and The Unpast: The Actual Unconscious (2016). Her latest translation, Laurence Kahn’s Psychoanalysis, Apathy and the Postmodern Patient is due to come out later this year in the New Library of Psychoanalysis series (Routledge).

Françoise Davoine is a psychoanalyst in private practice; she was a member of the Ecole Freudienne de Paris (the psychoanalytic organisation founded by Jacques Lacan) until its dissolution in 1980. She is Professor Emeritus at the Ecole des Hautes Etudes en Sciences Sociales in Paris where she led, with Jean Max Gaudillière, a weekly seminar on “Madness and the Social Link,” until Jean Max Gaudillière’s death in 2015. She is Erikson scholar at the Austen Riggs Center, Massachusetts, USA and delivers seminars and lectures in Europe, the US, and Latin America.

Patricia Gherovici is a psychoanalyst and analytic supervisor. She is co-founder and director of the Philadelphia Lacan Group and associate faculty in Psychoanalytic Studies at the University of Pennsylvania (PSYS). She is an honorary member of IPTAR, the Institute for Psychoanalytic Training and Research in New York City (IPTAR is part of the IPA) and a member of Apres-Coup Psychoanalytic Association, New York. Her books include The Puerto Rican Syndrome (Other Press: 2003; Gradiva Award and Boyer Prize), Please Select Your Gender: From the Invention of Hysteria to the Democratizing of Transgenderism (Routledge: 2010), Lacan On Madness: Madness, Yes You Can’t (with Manya Steinkoler, Routledge: 2015), Lacan, Psychoanalysis, and Comedy (with Manya Steinkoler Cambridge University Press: 2016) and Transgender Psychoanalysis: A Lacanian Perspective on Sexual Difference (Routledge: 2017).

Berjanet Jazani is a medical doctor and a practising psychoanalyst in London. She is an analyst member of the Centre for Freudian Analysis & Research, where she teaches and supervises clinicians and candidates in training. She is a regular contributor to the online publication of the Iranian Medical Council in the field of mental health. Forthcoming publications include: “Lacan, forbidden!” in Persian (2018); “A Phoenix Journey: Faces of desire” a collection of introductory essays on Lacanian concepts in English (2019); “A Resident of the World” and “Le Silence de la mer(e)” JCFAR2018/2019.

Brett Kahr has worked in the mental health profession for over forty years.  He is Senior Fellow at the Tavistock Institute of Medical Psychology in London and, also, Senior Clinical Research Fellow in Psychotherapy and Mental Health at the Centre for Child Mental Health, as well as Trustee of the Freud Museum London and of Freud Museum Publications.  He is author or editor of eleven books, including the best-selling Sex and the Psyche (Penguin Books) about the traumatic origins of sexual fantasies; and he has served as series editor to over fifty further volumes.  His most recent book is entitled Bombs in the Consulting Room: Surviving Psychological Shrapnel (Routledge, 2018), and his forthcoming book on The Traumatic Roots of Schizophrenia (Routledge, 2019) is due to appear shortly.

Vassilis Kapsambelis is a psychiatrist and a psychoanalyst, a full member of the Paris Psychoanalytic Society (SPP). He has been General Director of the “Mental Health Association in the 13th district of Paris” (ASM 13), the organization that introduced community psychiatry and psychotherapy in France. He currently directs the Centre for Psychoanalysis (Kestemberg Centre) of this association.

David Howell Morgan is a consultant psychotherapist and psychoanalyst, a Fellow of the British Psychoanalytic Society. He is a training analyst and supervisor at the BPA and a member of the IPA committee on Humanitarian Organisations. He has worked with psychosis at the Maudsley Hospital supervised by Murray Jackson and at the Portman Clinic with forensic patients. It is said that “Psychotic patients attack their own minds; Forensic patients attack the minds and bodies of others.” He is chair of the Political Minds seminars at the Institute of Psychoanalysis and co-chair of the EPF Political Minds. He is involved in Frontier Psychoanalyst Radio and Resonance FM. He lectures internationally and nationally. His most recent publications include “Inflammatory Projective Identification in Political and Economic Terrorism” in Psychoanalytic Psychotherapy (Spring 2018) and “The Return of the Oppressed” (Warsaw EPF Conference).

Anne Zachary is a Fellow of the British Psychoanalytic Society. She works in private practice as a psychoanalyst. She trained in medicine and psychiatry at the Royal Free hospital, specialized in psychotherapy at the Cassel hospital, trained concurrently as a psychoanalyst and worked at the Maudsley hospital, before becoming a consultant at the Portman Clinic. The Portman assesses and treats patients in the community with problems of sexual perversion, violence and delinquency. She also consulted to medium secure units and Broadmoor hospital. Her latest book The Anatomy of the Clitoris: Reflections of the Theory of Female Sexuality was recently published with Routledge (2018).

A limited number of bursary places are available for those under financial hardship.

Bursary places are charged at £35.

Priority will be given to UK unemployed and PIP/ESA claimants.

Apply for a bursary place